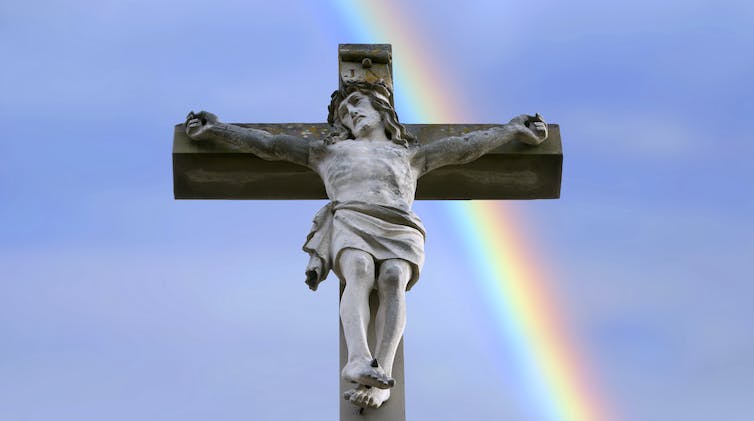 The Bible affirms, in various ways, the inclusion of those who diverge from male-female gender norms.
Shutterstock
Robyn J. Whitaker, University of Divinity

This article is part of a series exploring gender and Christianity

“God made Adam and Eve, not Adam and Steve,” is a line I’ve heard more than once in Christian circles. The Bible is often evoked to support so-called traditional views about gender. That is, there are only two binary genders and that is the way God intended it. But is this really the case?

Claims about gender in the Bible usually begin with the creation narratives. But the Adam and Eve story is also not as straightforward as it might appear when it comes to gender, namely because in English, we miss the Hebrew wordplay.

Adam is not a proper name in Hebrew, but rather the transliteration into English of a Hebrew word a-d-m. Using the imagery of God as potter, “the adam” is a humanoid being created out of the adamah (the earth).

Read more:
On gender and sexuality, Scott Morrison’s ‘blind spot’ may come from reading the Bible too literally

In fact, gender roles are only introduced into the story when a counterpart is made for the earthling, when this human being is separated into two. At that point, they both become gendered: “Eve” is called woman (ishah) taken from the man’s (ish) rib.

Some Christians have read a gender hierarchy into this text as Eve is called a helper – or “helpmate” in the old English versions – for Adam. This term, “helper”, does not indicate a subordinate status. It is a word frequently applied to God in the Bible, and so without any sense of inferiority.

On the sixth day, God created a gender spectrum

There’s no doubt traditional male-female gender roles are common in the Bible. After all, this is an ancient text that reflects the values of the societies from which it emerged.

In these societies, masculinity was the ideal and polygamy not uncommon. This makes it all the more astonishing there are moments of gender subversion and gender diversity found within the Bible’s pages.

Another creation story is found in the very first chapter of Genesis 1. It states:

At first glance, this might seem obvious: God made two different, discrete sexes. But if we look at this line in its context, we see this creation account follows a poetic structure made up of a series of binaries that indicate the breadth of God’s creation: light and dark, seas and dry land, land creatures and sea creatures.

In the structure of the Genesis poem, these binaries are not discrete categories, but indications of a spectrum.

Read more:
To Christians arguing ‘no’ on marriage equality: the Bible is not decisive


The sea and dry land merge on tidal plains. Some animals inhabit both land and sea. Darkness and light meet in the in-between spaces of dusk and dawn. God didn’t create night or day, but night and day, inclusive of everything in between.

If we apply this same poetic logic to humanity, a case can be made for sex and gender diversity built into the very fabric of creation. A creative diversity categorically called “good” by God.

Queer and feminist scholars have highlighted other moments of gender subversion in the biblical text.

For instance, Jacob is “smooth” and “stays in the tent” – traditional female attributes in the ancient world. Yet he is chosen over his hairy, hunter brother to lead God’s people. Rabbi Jay Michaelson describes Jacob as “gender non-conforming”. 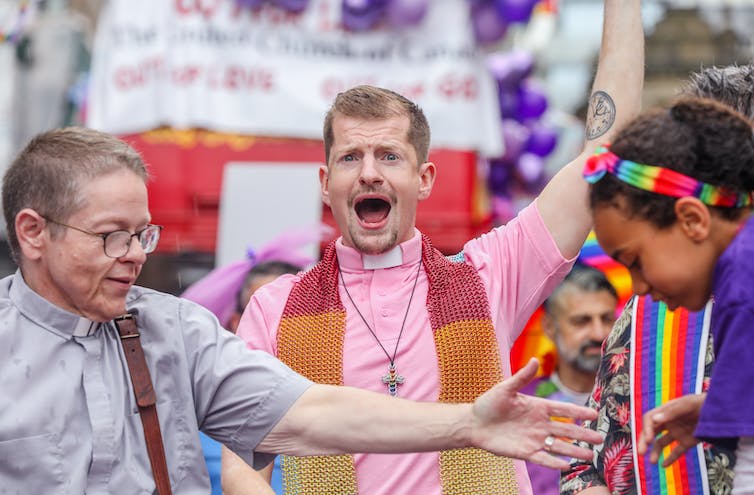 The Adam and Eve story is also not as straightforward as it might appear when it comes to gender.
Shutterstock
Megan DeFranza is a theologian who works on the place of intersex people in Christianity. While acknowledging that intersex is a modern term, she argues we find traces of intersex persons in the Bible in the language of eunuchs.

Jesus’ comment in Matthew 19:12 that “some are born eunuchs” is acknowledgement he was aware of intersex people and passes no judgement on those who don’t fit traditional male-female sex categories. In this passage, Jesus both affirms heterosexual marriage as well as intersex and asexual persons.

This is not an isolated case of affirmation. Isaiah 56 speaks of God being pleased with eunuchs who come to the temple and in Acts 8, a eunuch is fully included in the new Christian community through baptism. In neither case is change required of them before they can join the community in worship.

Read more:
Jesus wasn’t white: he was a brown-skinned, Middle Eastern Jew. Here’s why that matters


Being an ancient text, the Bible obviously doesn’t use the same language nor reflect contemporary understandings of gender, including transgender or intersex persons.

So we cannot simply pull a sentence or two from the Bible as if it offers the final word on sex and gender. Not only does the Bible reflect a pre-scientific worldview but also because the multiplicity of voices will never be captured in this kind of proof-texting.

What we can say is that the Bible affirms in various ways the potential goodness of all humanity and the inclusion of those who diverge from male-female gender norms.

While many churches remain unsafe places for transgender and gender-diverse people, it is imperative to highlight these subversive moments in an otherwise patriarchal text that challenge narrow perspectives, both then and now.

This article is republished from The Conversation under a Creative Commons license. Read the original article.